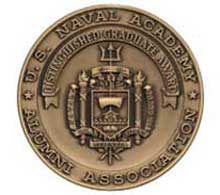 Nominations for this annual award will normally be provided by the presidents of Alumni Association chapters or graduated classes. However, nominees need not necessarily be a member of the Chapter or Class presenting the nomination. A narrative detailing the nominee’s contributions and distinguished service justifying selection as the recipient of the Distinguished Graduate Award must accompany the nomination.  Individuals who currently occupy or are currently candidates for elective office at the state or federal level and those who currently serve in an appointed senior government position (e.g. typically requiring Senate confirmation) are not eligible to receive the award. The exemption also applies to all individuals still serving on active duty. It is preferred that those selected agree to accept the award at the Naval Academy.
Alumni nominated, but not selected in the current year, are eligible for a total of three consecutive years and then are not eligible for one year. Nominators must submit a new nomination letter each year the Alumnus is eligible in order for their package to be reviewed by the selection committee. The nomination can then be resubmitted for an additional three years; this cycle of 3 on and 1 off are indefinite. Nominations that carry over should have current year endorsements and executive summaries.
Nomination Procedure
Any Alumni Association member can nominate eligible graduates for the DGA. All nominations must have the endorsement of a Class President or Chapter President. Each nomination for DGA must be routed through the nominee’s class president for their information and review. Nominations for the Naval Academy DGA are due each year by November 1st to be considered for the following year’s award.
Submissions should be made to DGA@usna.com consistent with the DGA Nomination Guidelines promulgated each year by the Alumni Association.
Nomination packages will clearly state that the nominee agrees to be nominated for the award and will make every effort to attend the DGA ceremony. Nominees should further understand that their packages will be vetted to take into consideration all publicly available information.
A member of the DGA Selection Panel may not be nominated or receive the award during his or her time serving on the Panel and for a period of two years after terminating service on the DGA Selection Panel.
Military officers, elected officials, political appointees, and Senior Executive Service officials may not be nominated or receive the award while still serving on active duty, holding public office, or still working for the government.
DGA Timeline

This entry was posted in General News Items. Bookmark the permalink.